skip to main | skip to sidebar

So here we are, another Christmas. It's been an exciting year as you all know, with the economy in the state it's in and other things going on. Speaking of the economy, if anyone wishes to hire me for small gatherings, birthday's and such, I am available at various times in the coming months. Fee's of course will be determined on how many players you wish to use. FYI, Doris now plays the tambourine and Linda sings. There is a new up and coming player for the group and he is Jude Williams, a beginning dulcimer player. Please email me for further information.

As far as the other things going on, further information will follow. 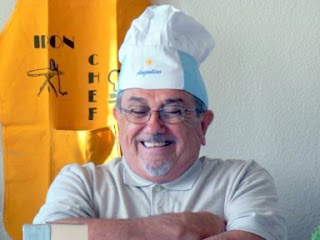 Several weeks before my birthday, Doris asked me what I wanted for a gift. As usual, I had no idea. Then this revelation came to me and I thought I would like to play an instrument. Knowing my capabilities, I looked for something easy. I thought of a fiddle but talked myself out of it. Somehow I saw and heard dulcimer and knew immediately it was the thing. So on my way to work one day I told Doris that I wanted to play an instrument. After I revived her I told her what it was, and like so many of you, she had never heard of it.

After weeks of research, I found the one I wanted and ordered it. I couldn’t wait till it came. Then one Wednesday, after work we were getting ready to go to dance lessons and the UPS truck pulled up. We promptly cancelled the dance lesson and my musical journey began. But enough of my musical adventure, you can read that in my blog.

Doris was still asking if I wanted a birthday party and I really didn’t. My sister Linda said she would come and I thought that would be plenty. I was originally thinking of a small dinner party with a few friends but I didn’t think we would be able to get all the people there. So, Linda appears on Thursday July 10 for my pre birthday warm-up. That same afternoon my co-workers had a birthday luncheon for me and another co-worker. We had a few people there and Doris also came.

The day of my birthday, July 17, a Thursday Linda and Doris and I went to IKEA for the day. We had lunch there and shopped and then went home. I had planned on pizza for my birthday dinner but we were still full from lunch and just skipped it. Linda left on Saturday July 19. So went my 70th birthday…………………..So I thought.

Our son Patrick had wanted to take me to dinner for my birthday but had to work on my birthday. He came down the following week, Thursday July 24th. When we got home from work that evening, he was there with his girl friend Brandy. Doris told me we were going out at 9 that evening and I thought that was kind of late for dinner. Stranger than that, we left without Pat and Brandy. Off we went to the airport and picked up our son Matt and Maria, his wife. So now it’s coming together, the boys came to have dinner with me for my birthday. Wrong……………. 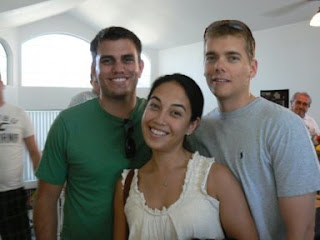 Friday morning the boys took off to play golf. The doorbell rang and Doris answered it and called me to the door. There stood two women and I’m wondering why she let someone in our house. She asked me if I recognized them and of course because of my age, I didn’t. Well it turned out they’re two of our friends, Wilma from California and her daughter Ticia from Oregon that we hadn’t seen in years. It looks like the plot is coming together, again, so I thought.

The next evening, Friday, off we went to dinner with our friends that we normally go out with plus Wilma and Ticia. We went without the boys because they don’t like old people. Dinner was fine as usual and there was dancing after. Doris did get up once to go to the lobby to answer her cell phone, which is not normal since no one ever calls her. So a short time after our friends Tony and Mary Perez, from California, that I hadn’t seen in years, walked in. Yes, Tony and Mary came in for my birthday. I was surprised and happy.

Wilma and Ticia and Mary and Tony were staying at hotels near the house and the next morning, Saturday they all came for breakfast. After breakfast Tony was giving me some pointers on the dulcimer and the doorbell rang, once again who should appear but my sister Linda, who had left the week before and my younger sister Marina with her husband Jim from northern California. This was going to be a nice birthday.

I’d better make this short or I’ll run out of Blog space. That evening our caravan of cars took off from my house and I still didn’t know where I was going. Doris directed me and at first I thought we were going to the Elks Club but we drove right by it. Finally we turned in to a community and I knew we were going to a restaurant called The Lakes. That much I knew, but what I didn’t know was that thirty plus of my friends came to surprise me. What a great party. Our friend Susie and Doris and my sister-in-law put this party (ROAST) together for me. What a roast it was. It was a great party. 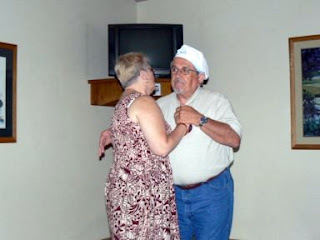 The next day, my brother-in-law and sister-in-law had a barbeque birthday party for me and some of the friends from the night before and some others came and had a great time.

Thank all of you who came and participated in my great party and thank you Doris, Suzie and Bill and Clair (I hope I didn’t miss anyone) for all the effort you put in to it. 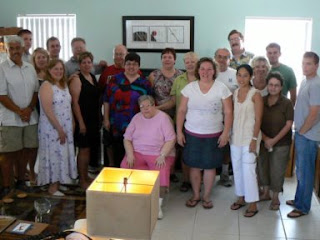 Earlier this year my wife and I, my sister and brother-in-law and sister in-law went to Buenos Aires for our son's wedding. I admit I wasn't, and probably no one else was looking forward to a very long flight. It was worth the trip. The city was beautiful and the new in-laws were most gracious. The newlweds are currently living in Manhattan. The wedding was great and many of our sons and his wifes friends came to Argentina for the wedding. Words can't describe it but let me just say the dancing ended at around 4:30 in the morning. When I leanrn how, I'll post some pictures.
Posted by Jon at 2:28 PM 1 comment:

Well I lost my last blog so all is forgotten. (That's for those of you who actually read my last blog. I'm in a hurry at the moment so I'll give you a brief. This year I was in Argentina for our son's wedding. I was also in New Orleans traveling with my nemesis which is a blog in itself. I have a new hobby (or addiction) that you will see here shortly. Your comments are welcome.
Posted by Jon at 11:36 AM 2 comments: